Of all phase transformations, few have been more widely observed and studied than the transformation of a liquid to a solid (that is, solidification). No activation energy or undercooling is required to add atoms onto an existing substrate. This is the situation that develops when a liquid solidifies on a substrate of the same material or one that is similar in composition and structure, as in the solidification of a weld.

The process of solidification is the same in all cases, whether it is the freezing of water on a windshield or in a freezer, or the solidification of metal in a casting or in the weld that joins two solids.Weld solidification: Fig1. : TEMPERATURE DEPENDENCE OF BULK FREE ENERGY OF THE LIQUID AND SOLID PHASES IN SINGLECOMPONENT SYSTEM, THE SOLID LINE PORTION AND THE DASHED LINE PORTION OF EACH GL, AND GS CURVE INDICATE THE STABLE AND UNSTABLE PHASES, RESPECTIVELY, OF THE FREE ENERGY ON EITHER SIDE OF TF

Where ΔHf, the latent heat of fusion, is negative, hence, in agreement with Fig. 1, ΔG is negative. The greater the amount of undercooling (super cooling) below Tf (Tf – T‘), then the greater the thermodynamic driving force for solidification.

FREE ENERGY OF FORMATION OF A NUCLEUS AS FUNCTION OF ITS RADIUS: 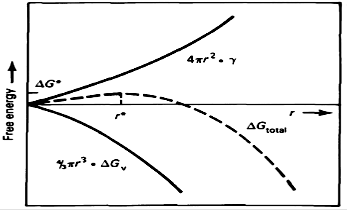